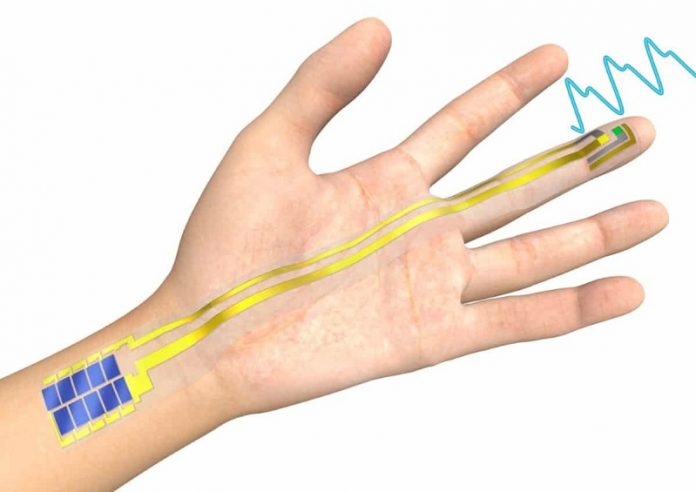 Scientists from the Hiroshima University and the University of Tokyo in Japan have developed an ultrathin self-powered organic optical system for applications in the monitoring of photoplethysmogram (PPG), which is an optical technique used to detect volumetric changes in blood in the peripheral circulation.

It is a non-invasive technology that utilizes a light source and a photodetector at the surface of the skin to measure the volumetric variations of blood circulation and is also used for heart rate monitoring.

It means that the limiting factor of the cost is material, which is organic Semiconductor itself and if organic solar cells are widely used in society, the cost of devices will be reduced.

The system, which is just a few microns thick, was built with an organic solar module, a polymer light-emitting diode (PLED), and an organic photodetector.

The PLED is powered by an organic module with 10 series connections that showed a 28.1% efficiency with 1000 lux of fluorescent lamp illumination under indoor light. This value is equivalent to the power output of 78.2 µW/cm2 whereas power output under 5000 µW/cm2 simulated sunlight is 290 µW/cm2, the scientists explained. With these results, the self-powered PPG system should work under 1000 lux of indoor light with OPV modules of 4.5 cm2 device area.

To the best of our knowledge, this is the first study that demonstrates the use of self-powered optoelectrical sensors in ultra-flexible organic devices. This self-power technology used in this study will pave the wave of ultra-flexible wearable optoelectronic devices which take an important role in future ubiquitous healthcare society.